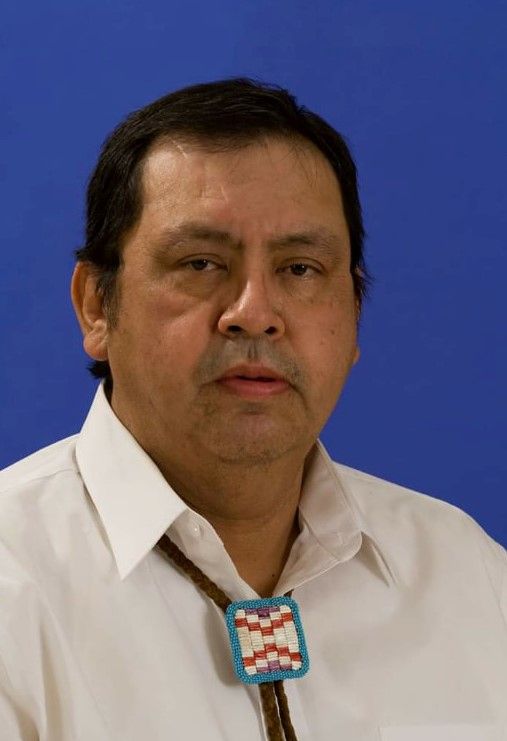 David Dragonfly, an enrolled member of the Blackfeet Tribe, uses his art to share the culture and history of the Blackfeet Indian people.  As an accomplished artist, he specializes in various artforms, such as linocut, ledger and collagraph paintings, and three-dimensional art including hide and woodwork.  These different media allow him to express his creativity by capturing the vibrant colors and designs that radiate from his interpretations of life among the Blackfeet people.

Although Mr. Dragonfly has Assiniboine family roots, he was raised on the Blackfeet Indian Reservation in Browning, Montana.  He attended the Institute of American Indian Art in Santa Fe, New Mexico, where he learned to make jewelry and carve stone.  Afterwards, Mr. Dragonfly enrolled at the University of Montana in Missoula, Montana, where he graduated with a Bachelor of Fine Arts in Painting in 1988.

Inspired by his diverse Native cultural background, Mr. Dragonfly began painting and drawing at a very young age.  Throughout his life as an artist, he developed an interest in the pictographic form of art.  This type of art is a historic form of Native American expression used by many Plains Indian tribes.  His time spent with University of Montana art professors Mr. Don Bunse and Mr. Jim Todd have inspired him further.

Mr. Dragonfly has participated in various exhibitions throughout his art career.  He was the featured artist at the Northern Plains Tribal Art Show in Sioux Falls, South Dakota, and participated in the Colorado Indian Market in Denver, Colorado, the Heard Museum Indian Fair in Phoenix, Arizona, the Helena Indian Market in Helena, Montana, and the Great Falls Native American Art Show in Great Falls, Montana.

This exhibit presents an exemplary portrayal of Mr. Dragonfly’s art style which is strongly influenced by his Blackfeet and Assiniboine cultural roots and the beautiful landscapes of the Blackfeet Indian Reservation.  His visually appealing artwork and imagery are reminiscent of Plains Indian pictographic art found in Montana and neighboring Canada.  It is a style with very clean lines and broad, strong colors.

The artwork featured in the exhibition may be purchased by contacting David Dragonfly at davidjohndragonfly@gmail.com. 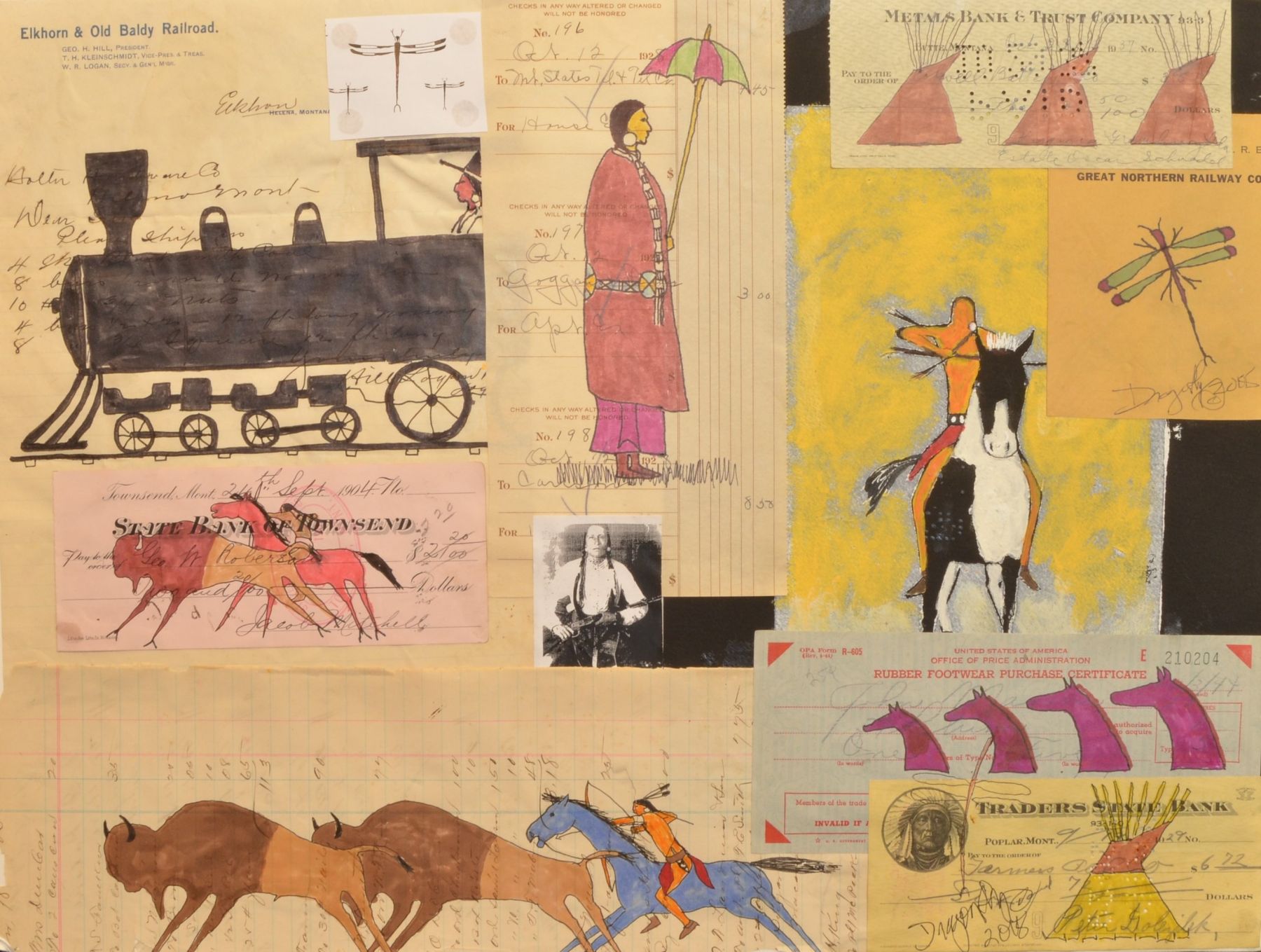 This collage is a mixed media piece, which includes ledger and linocut art.  It consists of several old documents that are assembled and painted with different designs, images and scenes. Mr. Dragonfly is deeply connected to this artwork because it includes a photograph of his great-grandfather Yellow Owl of the Blackfeet Tribe.  The photograph was placed in the center of the composition because it demonstrates the importance of historical family roots to the artist. 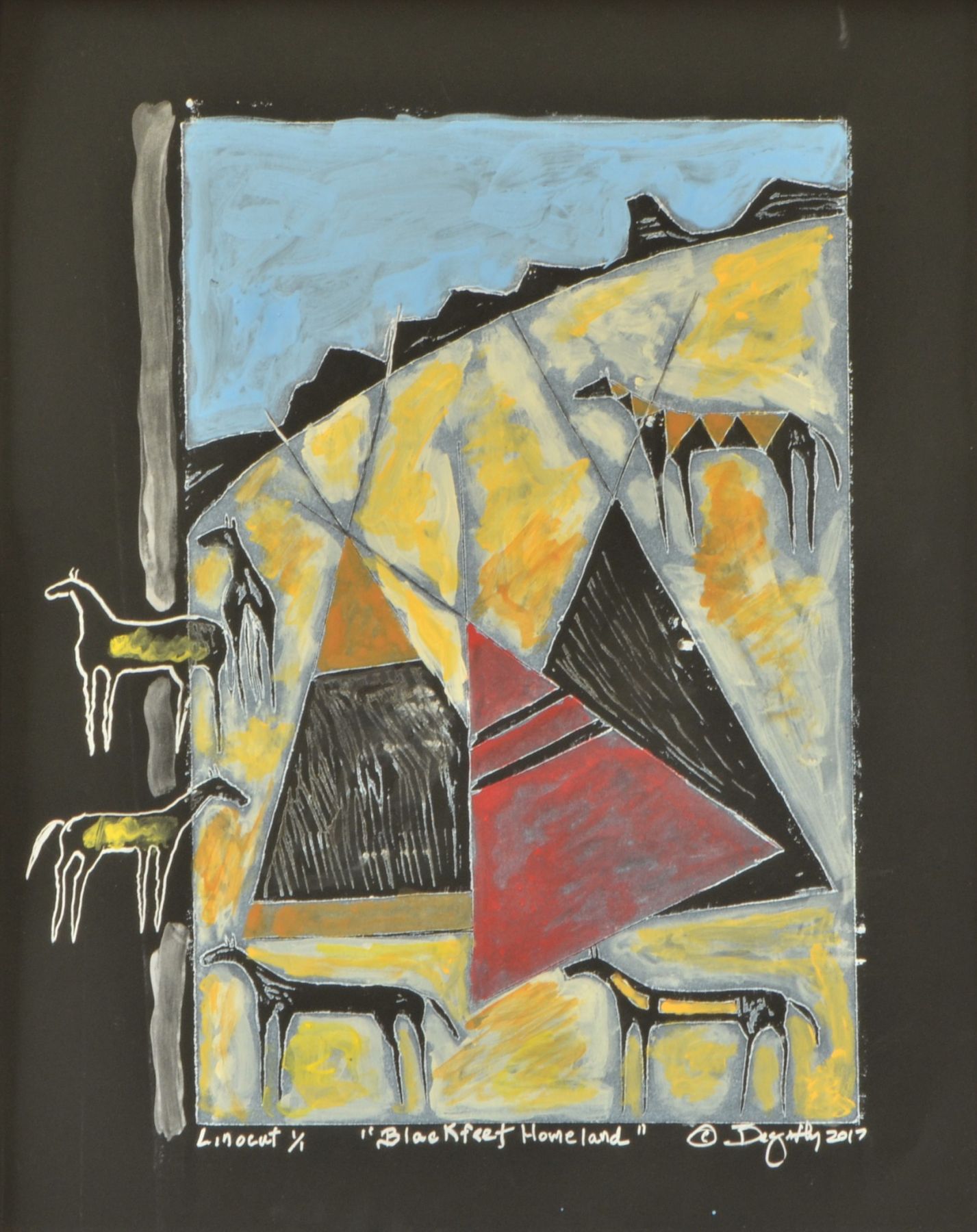 This linocut piece represents the life of the historical Blackfeet Indian people.  The Blackfeet were Plains Indians who utilized the tipi for lodging and migrated from the flat plain during buffalo hunts to the base of the mountains for shelter in the winter.  This print depicts the Rocky Mountains in the background, a place that the Blackfeet roamed and hunted for hundreds of years.  This linocut also displays horses, which were an essential part of the world of the Amskapii-Pikunii, the Southern Blackfeet. 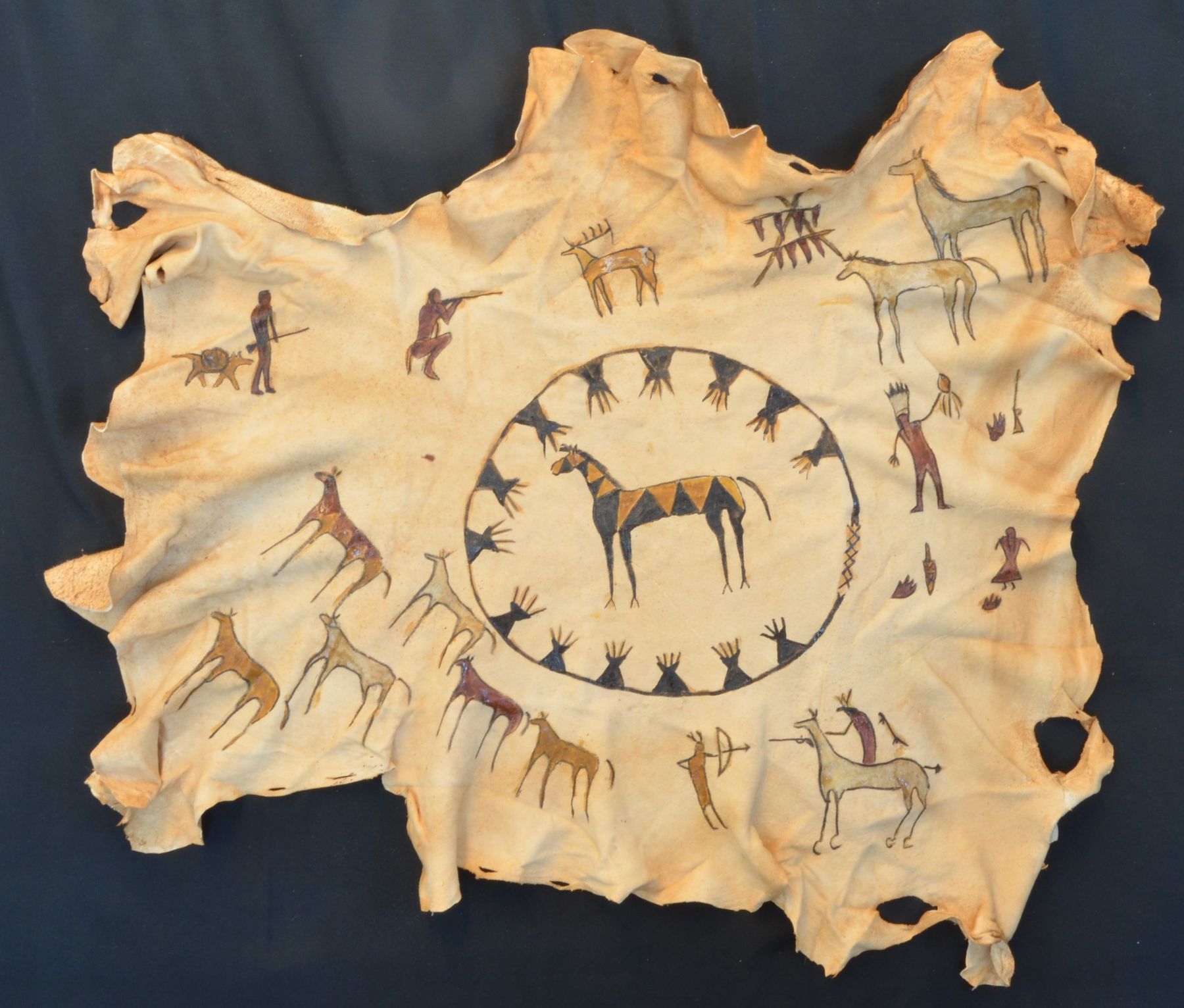 This hide painting portrays a Blackfeet warrior by the name of White Quiver.  White Quiver was the most clever horse thief of the Blackfoot Confederacy.  White Quiver was known for stealing up to 50 horses from the Crow Indian Tribe of Montana in the late 1880's.  This painting depicts his exploits and encounters during his horse thieving days. 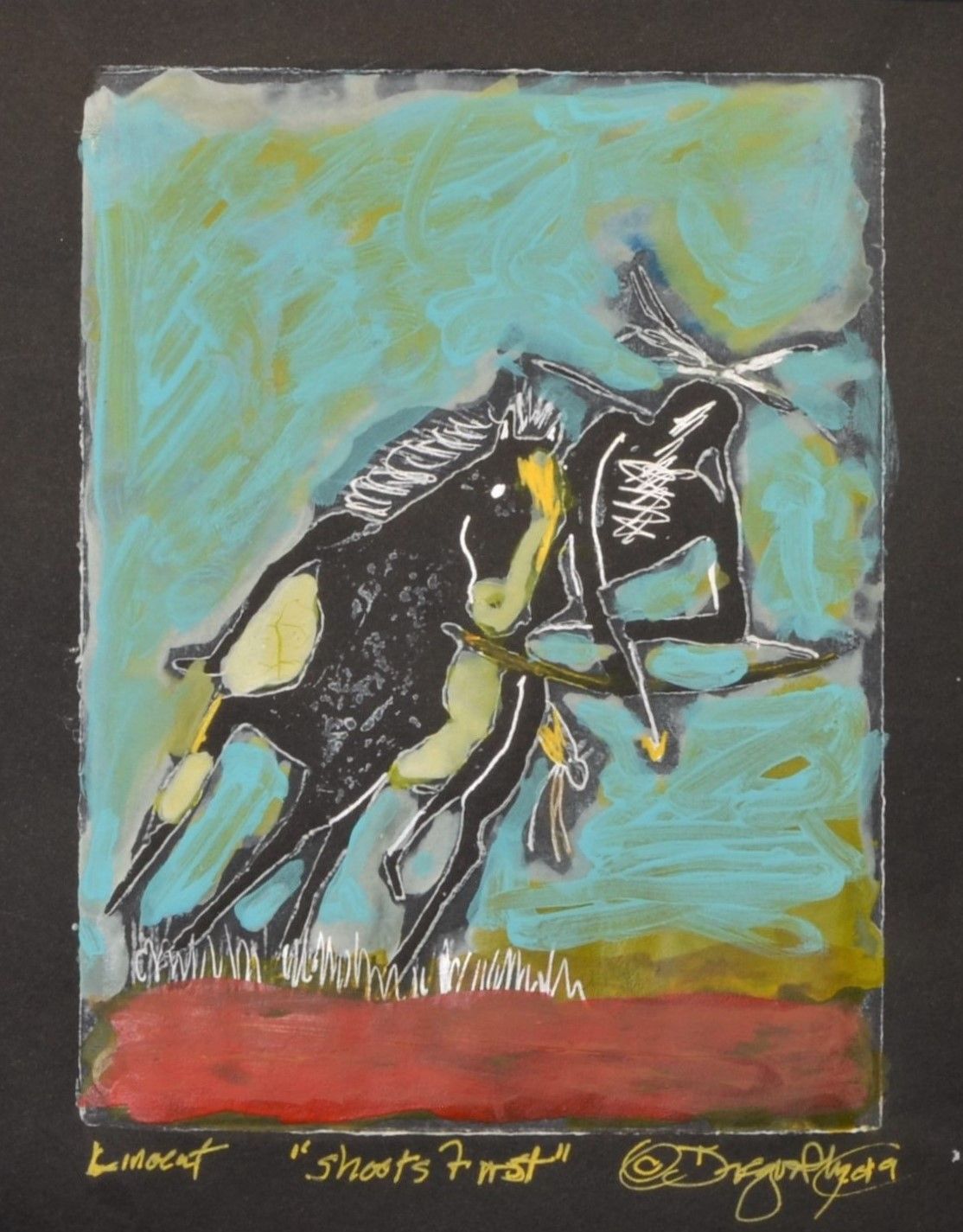 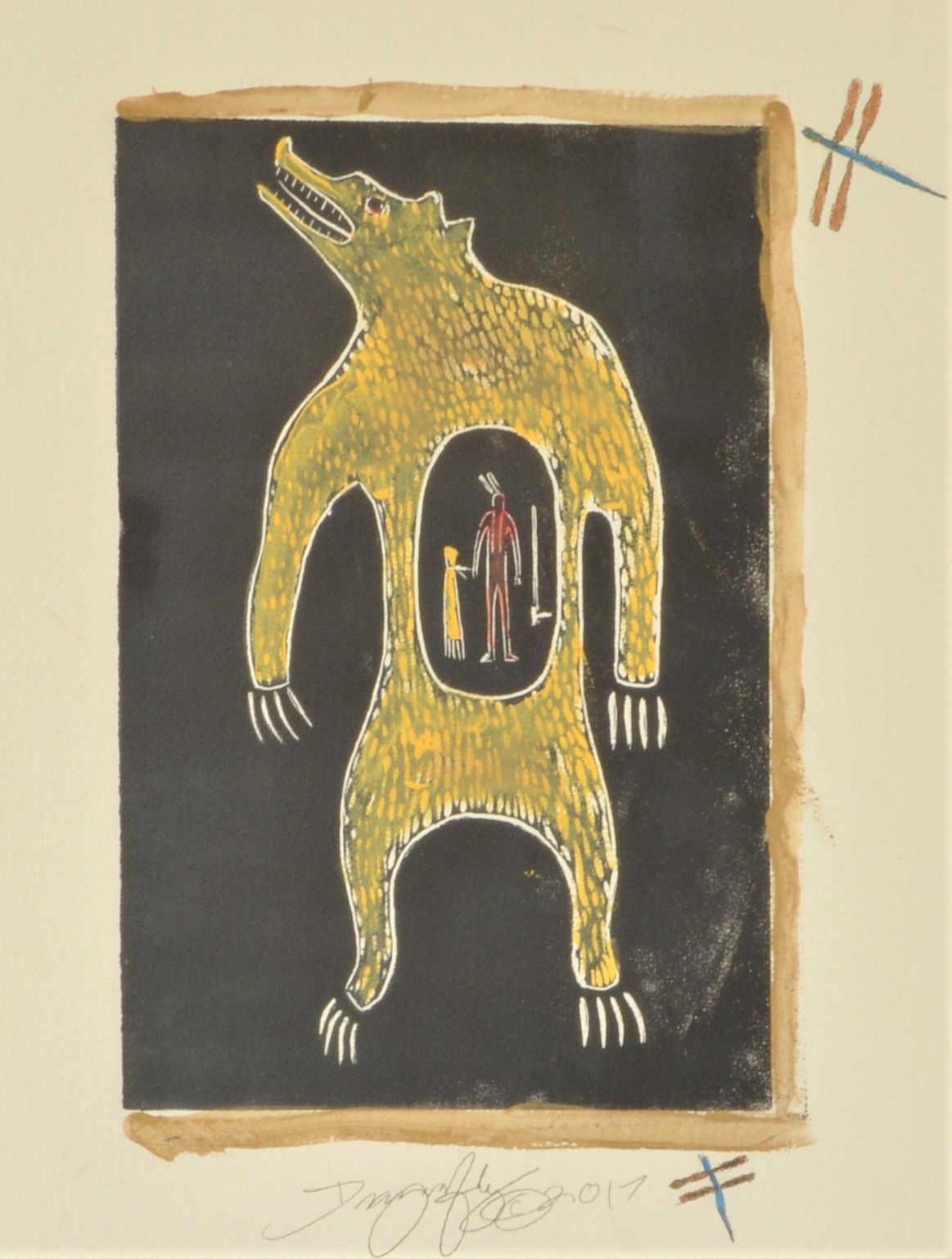 Mr. Dragonfly created this linocut as a depiction of spiritual life among the Blackfeet.  Spirituality was a significant and important part of the everyday life of the Blackfeet Indian people.  The bear was often looked to for guidance in times of concern or hardship.  Animals play a very important role in the lives of Native American people and the bear is often sought in prayers and visions.  This piece shows the Blackfeet with the ceremonial pipe and pipe bag, which is a main item used in spiritual ceremonies.  Mr. Dragonfly is portraying the Grizzly Bear as the protector and guide to the spirit world in this linocut. 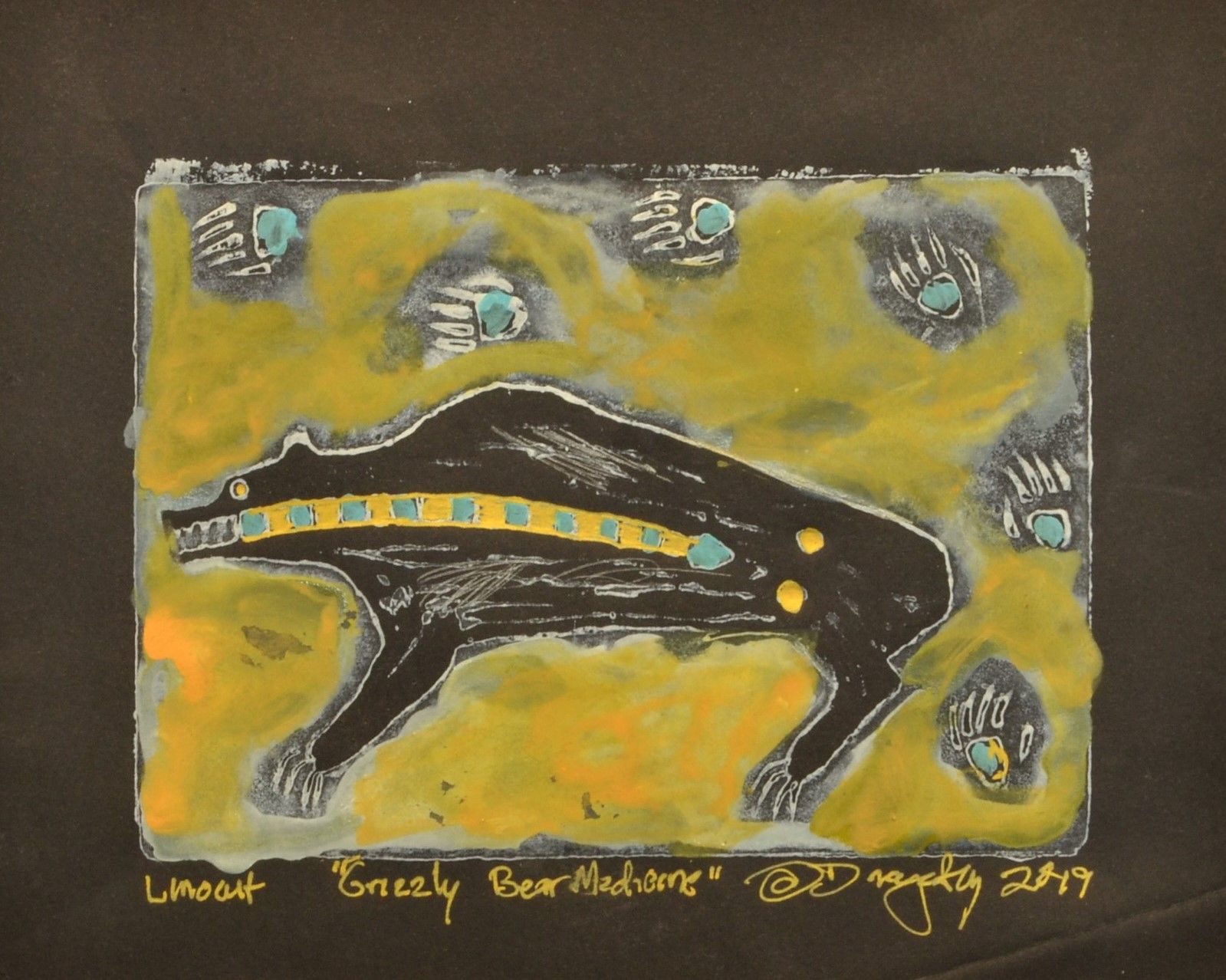 Mr. Dragonfly titled this linocut art piece Grizzly Bear Medicine.  The portrayal represents and depicts the strength and cunning of the grizzly bear.  The grizzly bear is one of the most respected animals on the Great Plains because of the noble status that it holds in the wild.  It travels over many types of terrain and often in other wild animals' territory, moving along with confidence.  It seldom shows weakness but rather perseverance because of its need for survival.  That natural tendency of survival and strength is why the grizzly bear is revered and respected by the Plains Indian people. 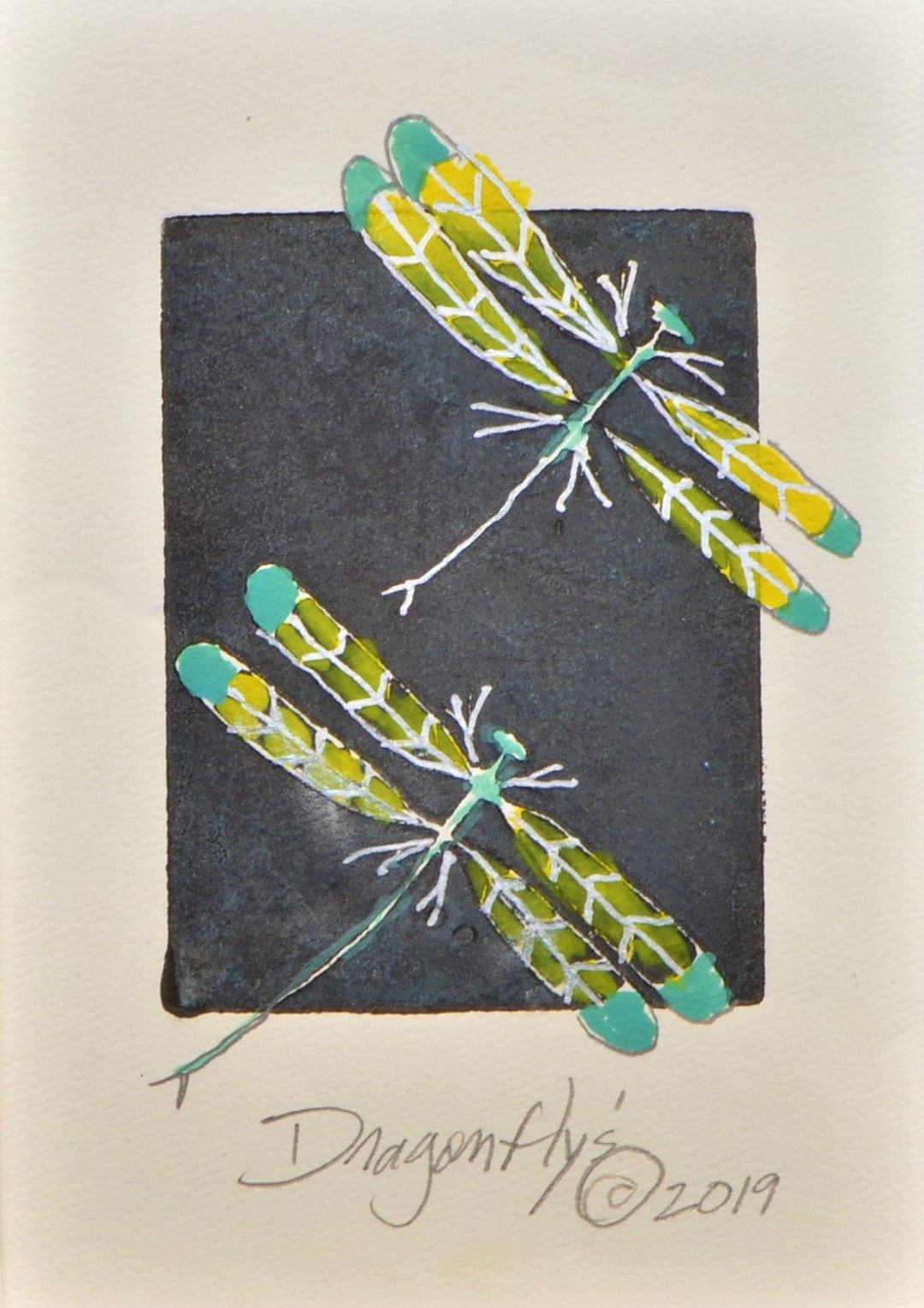 Mr. Dragonfly carved this image of two dragonflies out of a linoleum block.  The dragonflies in this piece represent dreams for eternal life and life experiences.  Dragonfly is the ancestral name of Mr. Dragonfly's family, which was his father's last name.  Native American people are connected to their natural surroundings, including other living things.  Oftentimes names were given to Native Americans based on an event or special life circumstance that included these animate or inanimate objects.  These names are an important part of the lineage and family history and are given honor out of respect for the ancestors of the past. 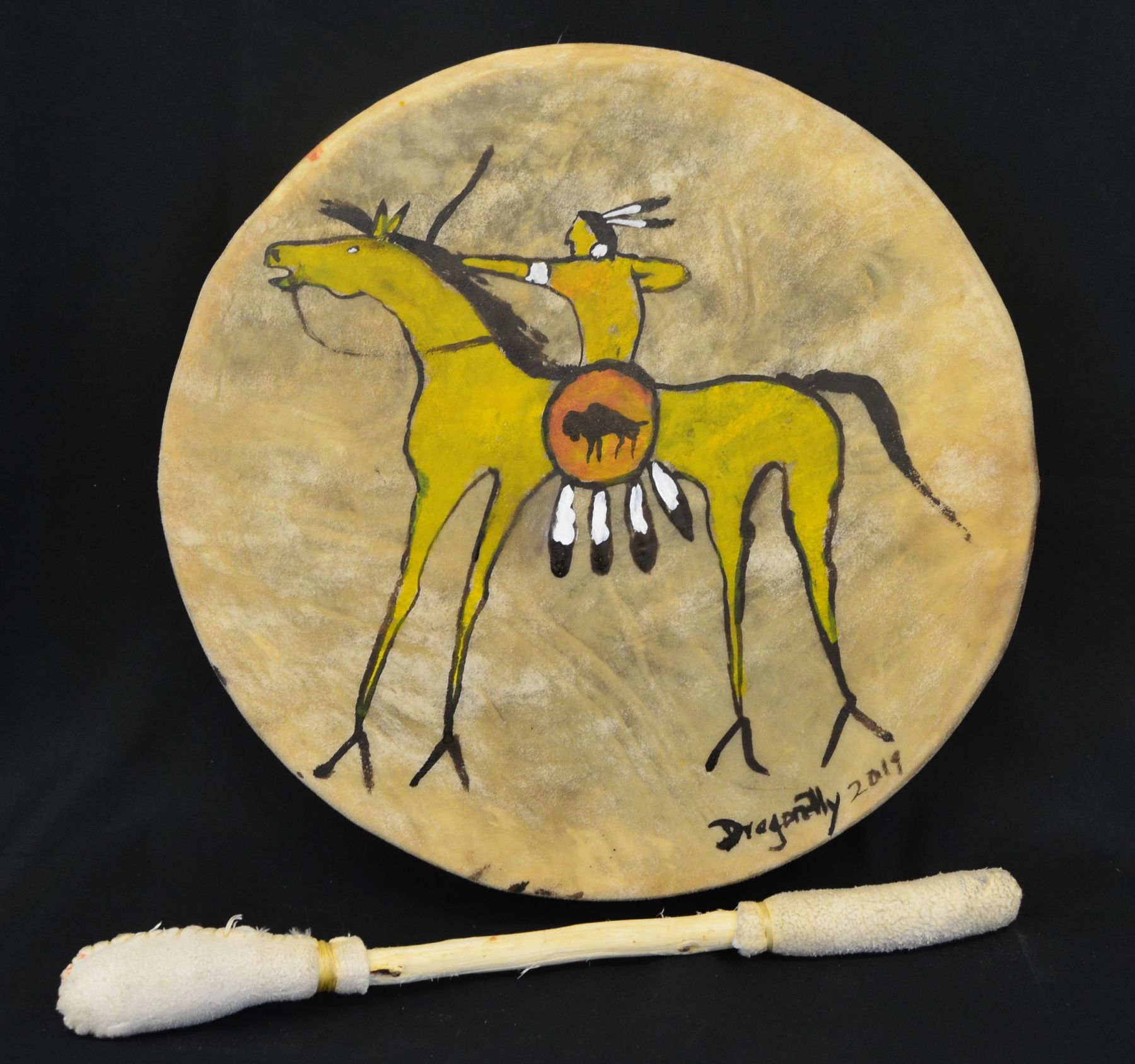 This hand drum painting is a depiction of a Blackfeet hunter and warrior.  Blackfeet horses were very well-trained and knew exactly when to be quiet and still.  The hunter is drawing his powerful bow to strike his prey.  The Blackfeet were often called the warriors of the Plains and were widely known as skilled hunters and fierce adversaries. 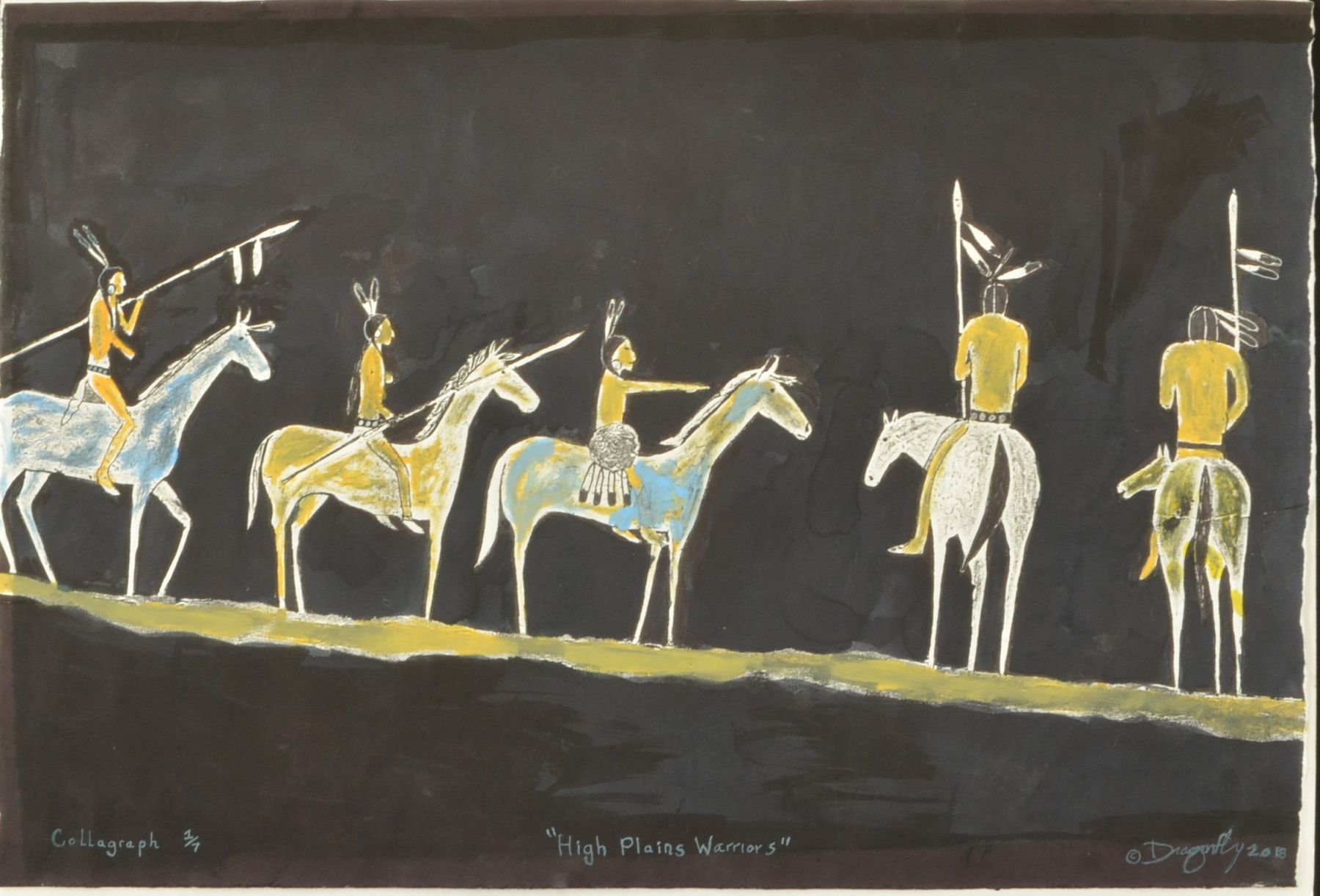 This collagraph painting depicts a Blackfeet hunting party on the lookout for game, such as deer, elk or buffalo.  Hunting game was an essential part of the daily lives of Plains Indian people.  Wild game not only offered meat for food but also provided hides to be used as clothing, containers, blankets and shelter.  The bones of animals were also utilized as weapons, utensils and tools. This hunt is portrayed to take place in the Rocky Mountains, which at one time was part of Blackfeet Indian territory but is now Glacier National Park. 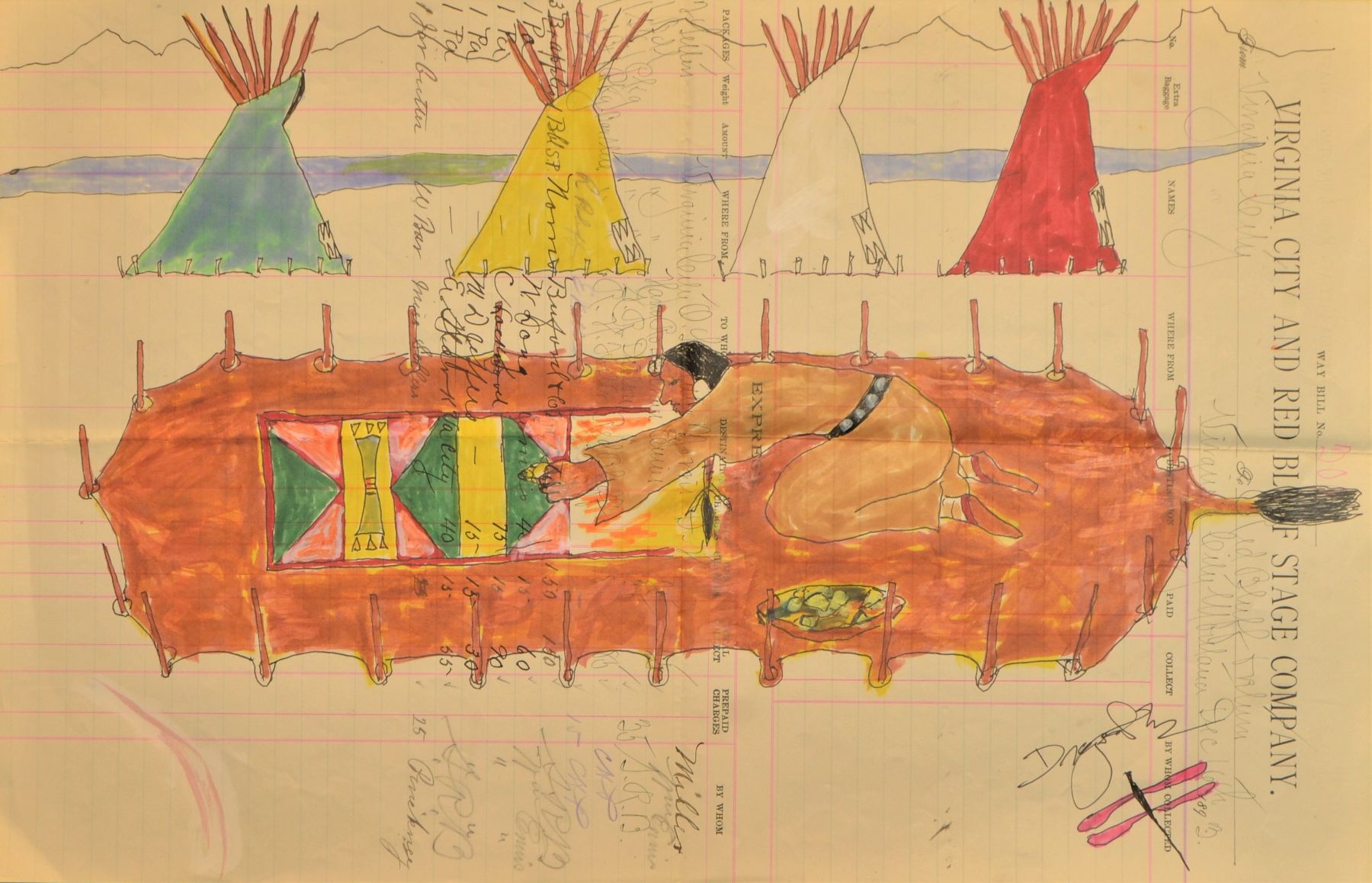 This ledger art piece is entitled “Tanning Hides”. The 1893 ledger is from Virginia City, Montana, which was a famous gold mining town with a rich history. The painting depicts a Blackfeet woman painting a parfleche design on a hide. Parfleche painting was a skill that Native American women performed.  The parfleche was painted with geometric or pictographic type designs when the hide was still staked into the ground. Many designs painted, beaded or drawn by Native American people represented daily life or events of individuals, families and/or the tribal community. Therefore, the painter had the knowledge of the designs and stories that were drawn and painted on the hide itself. 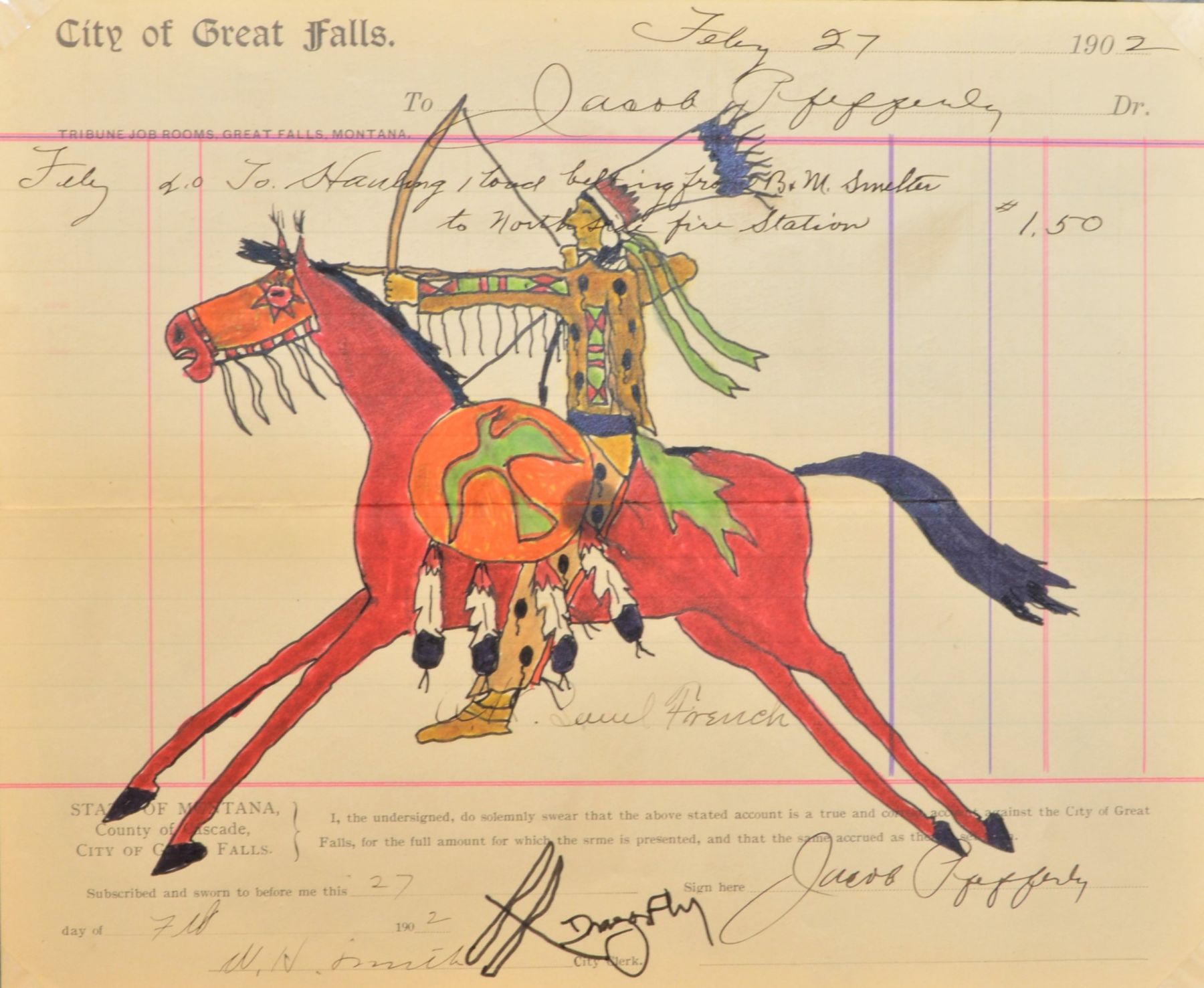 The Warrior and Red Horse drawing represents the warrior riding into the wind with his masked horse.  The warrior shield is represented by a thunderbird.  The thunderbird is significant to the Blackfeet because when the thunder first appears in spring the Thunderbird medicine bundle is opened.  The warrior’s shirt depicts tadpoles, which represent the life of renewal in the springtime. 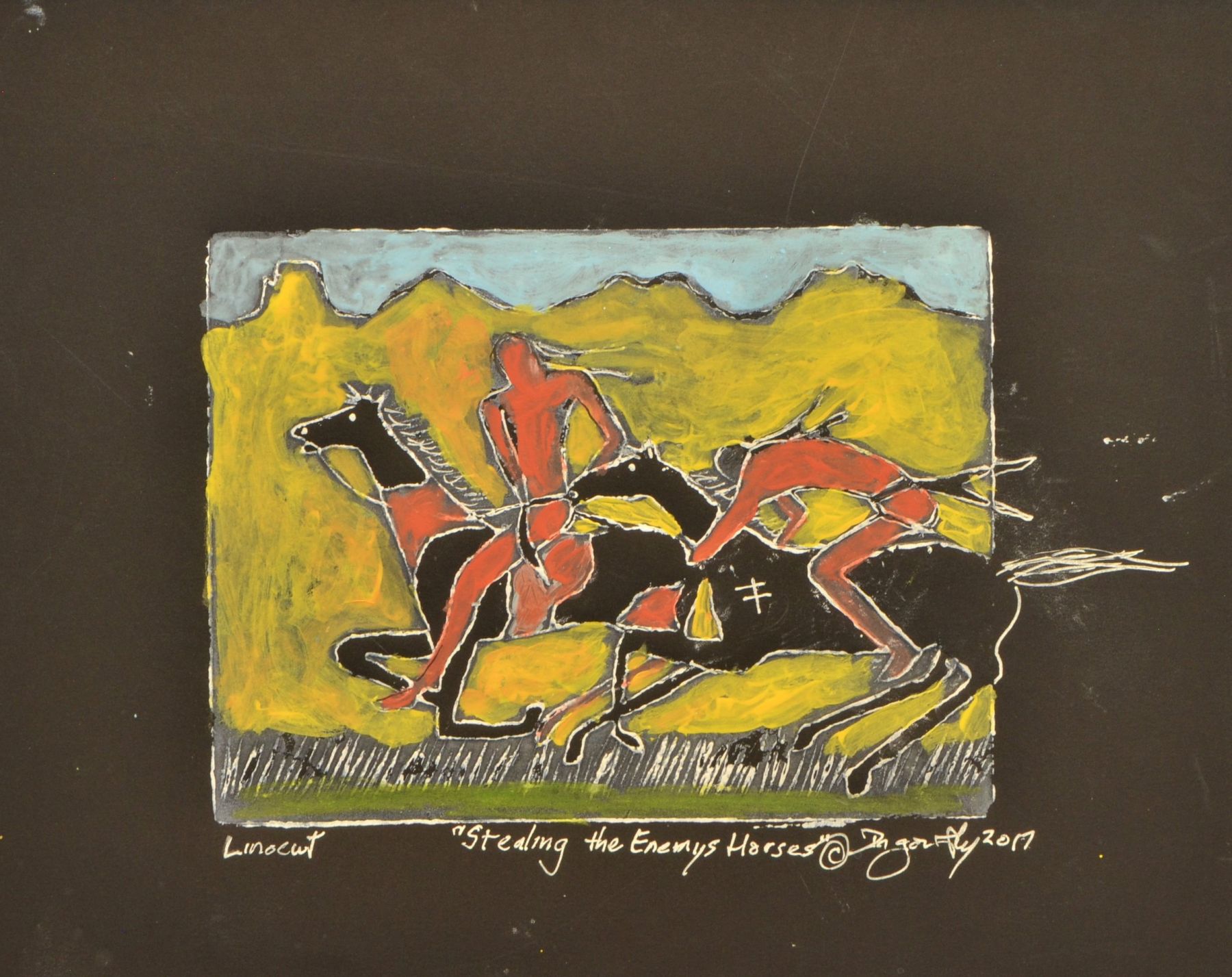 Stealing the enemy's horses was a favorite past time of the Plains Indian people.  After Plains Indians were introduced to the horse, it quickly became a prized possession.  During these times, war between tribes over territory and resources was very intense.  Acquiring the horse made these war times even more intense.  Plains Indian tribes would steal the horses of their enemies, accumulating more and more, which made them more powerful.  The stealing of horses was also a way of humiliating the enemy.  This linocut portrays that daily event of Plains Indian people. 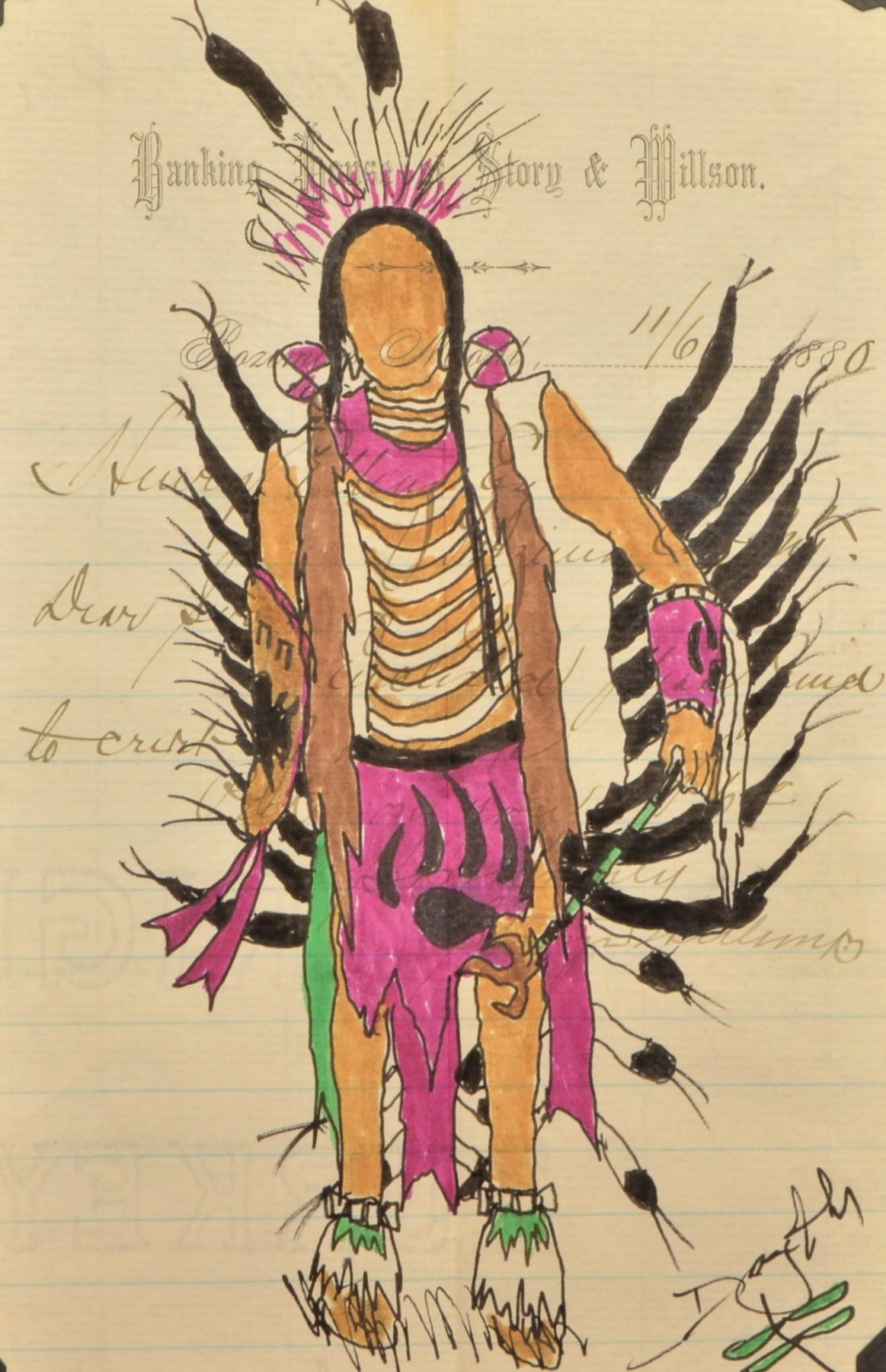 Stabs to the Heart

Stabs to the Heart

Inquire
The Artforms of David Dragonfly