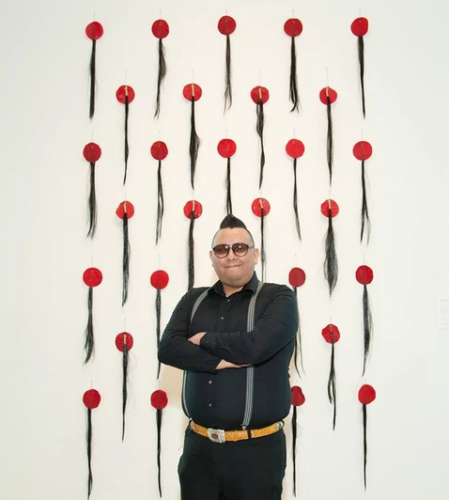 As a child he was deeply influenced by his parents.  His father was a painter, and encouraged Mr. Wesley to accompany him to collect supplies, visit galleries, and meet fellow artists. His mother’s singing continues to guide his hand while painting, allowing him to transfer his personal thoughts and emotions onto the canvas.  Childhood drawings of animals and dinosaurs eventually blossomed into more mature subjects.  As a teenager, exposure to graffiti art also influenced Mr. Wesley’s style and technique.  Today he works in various media, including oils, acrylics, and enamel paints, on gessoed canvas.  Mr. Wesley creates most of his artwork spontaneously, placing brush to canvas whenever struck by inspiration.

Much of his current work draws parallels between films and the history of Native Americans.  Rejecting the traditional narratives of art history, which he views as overly homogenous, he seeks to emphasize individualism and identity in his art.  Mr. Wesley’s recent painting focuses on science fiction films, such as Mad Max 2: The Road Warrior.  He draws inspiration from the life struggles of characters and communities and uses these themes to create connections between contemporary Indian communities and those inhabiting a dystopian future.  Many of the paintings in this exhibit relate to the "Road Warrior" of the Mad Max film series, a haunted individual who is neither good nor bad, but who symbolizes the human drive for survival against all odds.

The artwork featured in the exhibition may be purchased by contacting Micah Wesley directly, at thewerewulfmicah@gmail.com or by visiting his website www.wulfbrand.com. 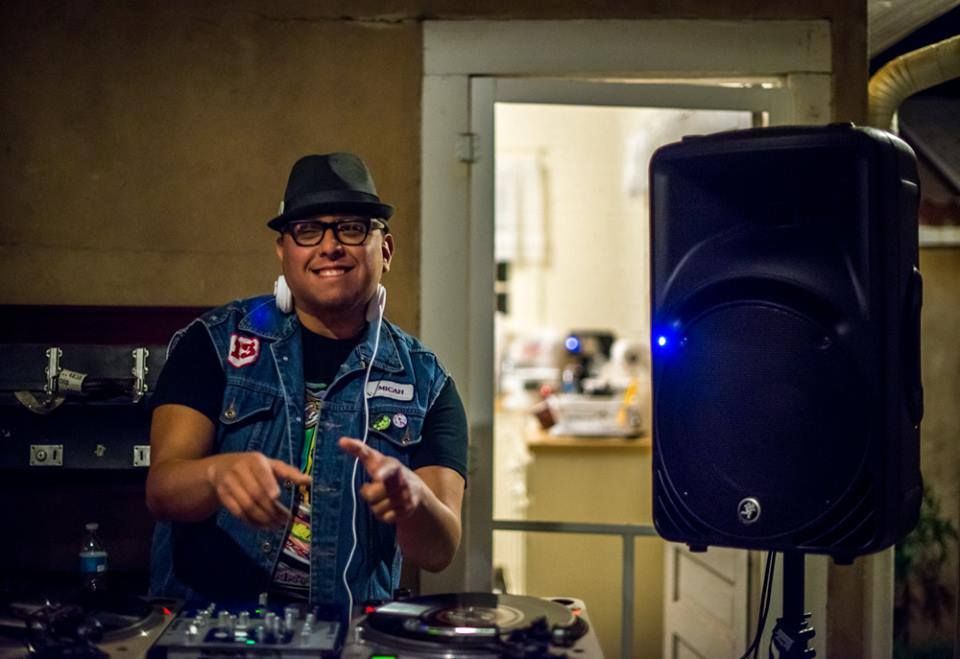 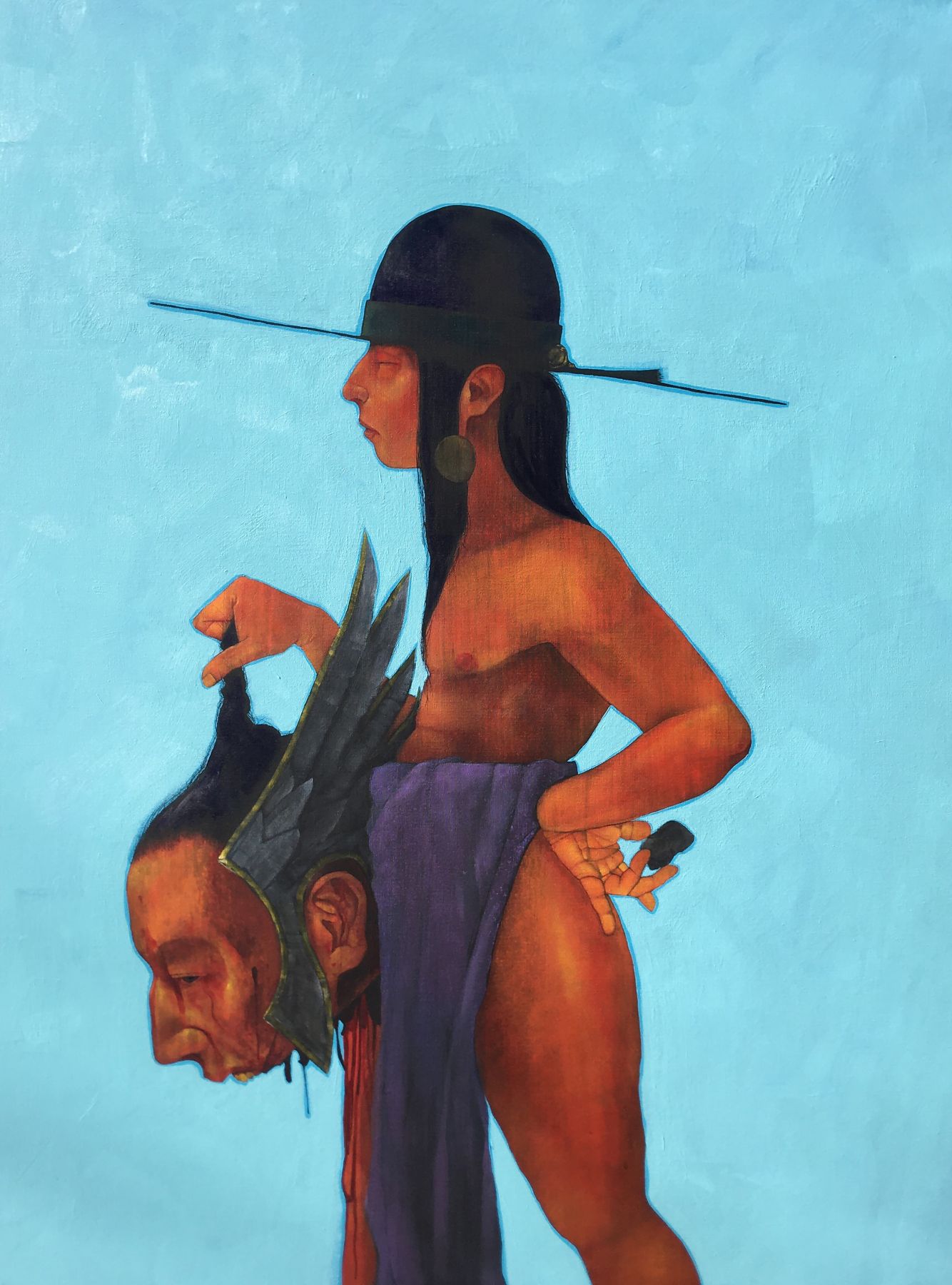 Arrival is one of Mr. Wesley’s most recent works.  It was inspired by Donatello’s David sculpture from the 15th century.  This sculpture was one of the first freestanding nude sculptures created since antiquity.  It depicts a youthful David, standing on the severed head of Goliath.  The original sculpture was made shortly after the Florentine people defeated the Duke of Milan in a decisive battle and it is believed to reference this event.  They identified with the biblical story of David and Goliath and it is an allegory of the triumph of good over evil.

This piece is called Arrival in reference to the increasing presence of Native American art in the established art world and markets.  Long relegated to a supporting role in the mainstream art world, the artist now sees Native American artists as the “David” in this story.  They are vanquishing the “Goliath” of establishment galleries and museums.  Emerging and established Indigenous artists are now being included in major exhibits at institutions such as the Metropolitan Museum of Art and the Minneapolis Institute of Art.  Drawing on the historic use of color, the purple loin cloth worn by the figure is a reference to the use of the color purple by royalty.  The male figure also has soft features and feminine characteristics in another reference to Donatello’s original sculpture. 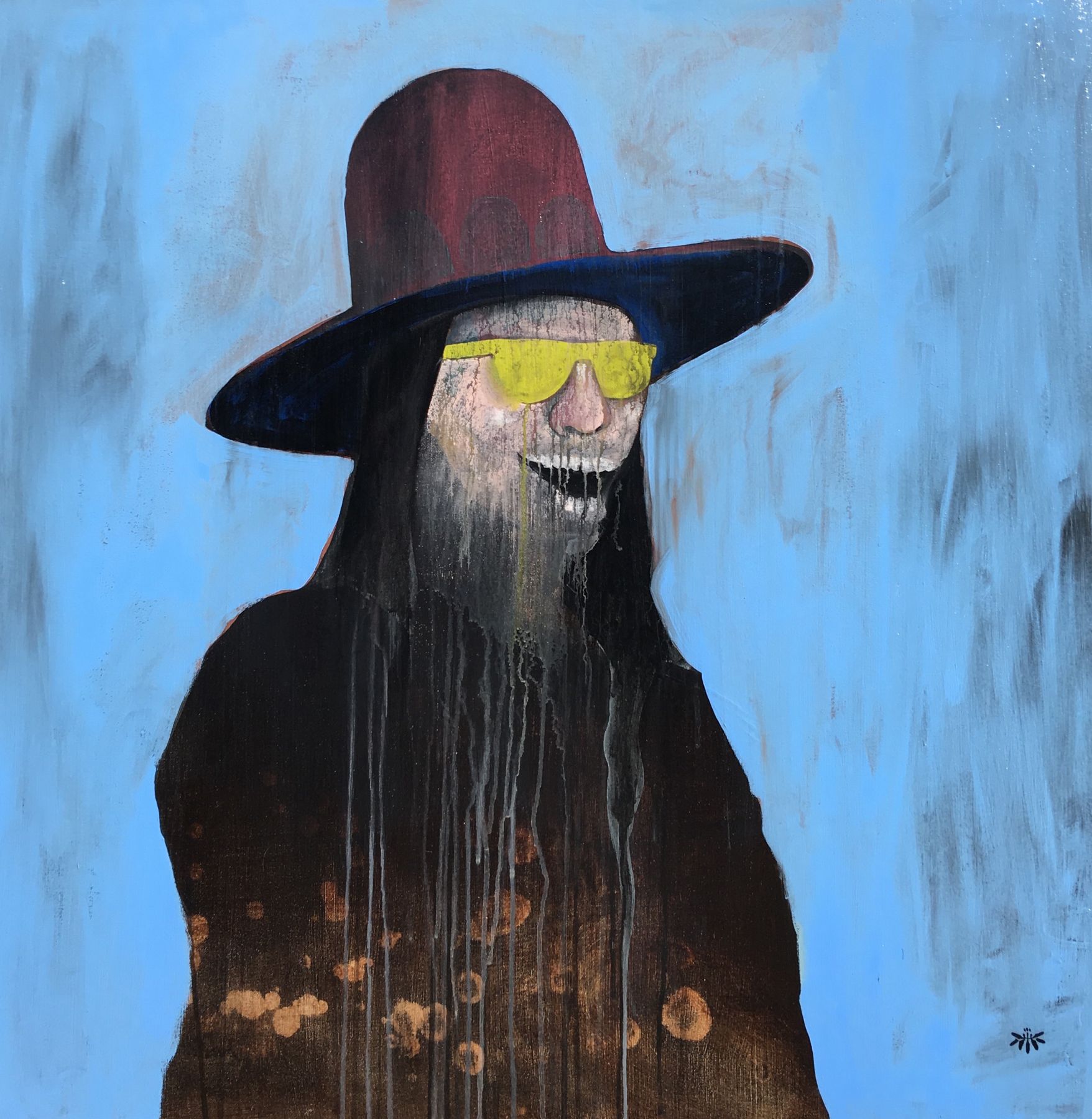 Activist Party Guy is a departure from Mr. Wesley's typical style and technique.  Using loose gestures and brushwork not usually seen in his work, he has created a figure that is both comical and haunting.  This dichotomy is a key feature of Mr. Wesley’s work.  Anecdotal stories about misguided activism inspired the creation of this piece.  The piece is statement on those who use the cover of activism or social causes to advance their own personal agenda.  Sadly, there will always be opportunities for bad actors to take advantage of situations and others.  Here the artist calls them out and exposes their true intentions. 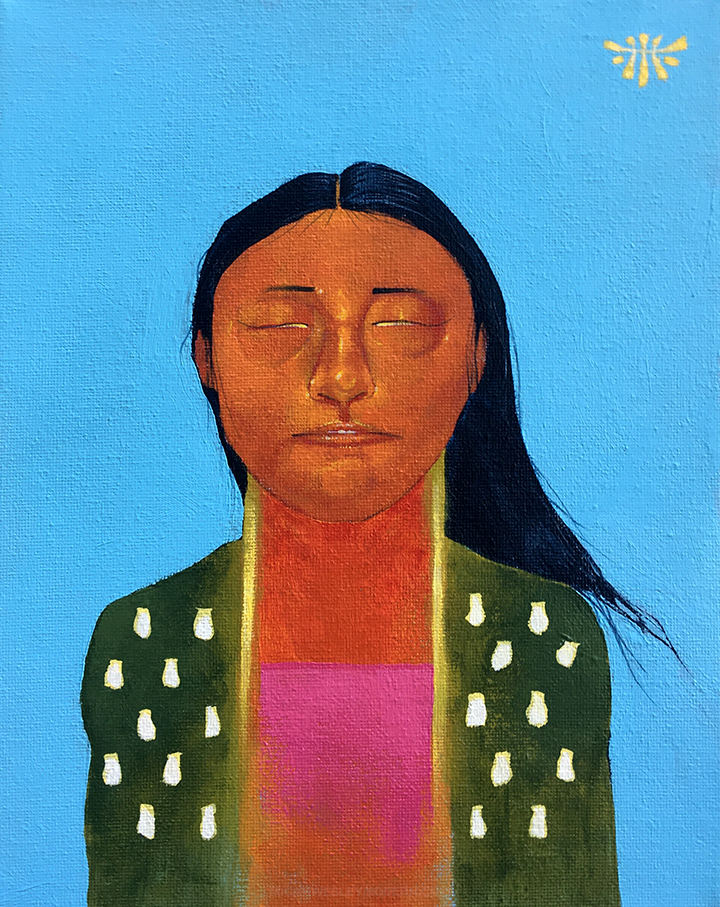 College Kid relates to the artist's own preconceived notions about higher education and the social environment there.  The young woman wears a cardigan decorated with elk teeth.  This is a reference to the blend of traditional and modern worlds that many of these students navigate.  During his time as an undergraduate student, Mr. Wesley was pleasantly surprised to meet students who were more interested in their academic achievements than in social events and parties.  This piece pays homage to one such acquaintance of the artist.

Creek Kid out in New Mexico is a refers to the artist's own experience as a student at the Institute of American Indian Art in Santa Fe.  During his time there, Mr. Wesley was introduced to Native American artists from across the country, an experience that helped to dispel preconceived notions he had about both the college experience and the students who were there. 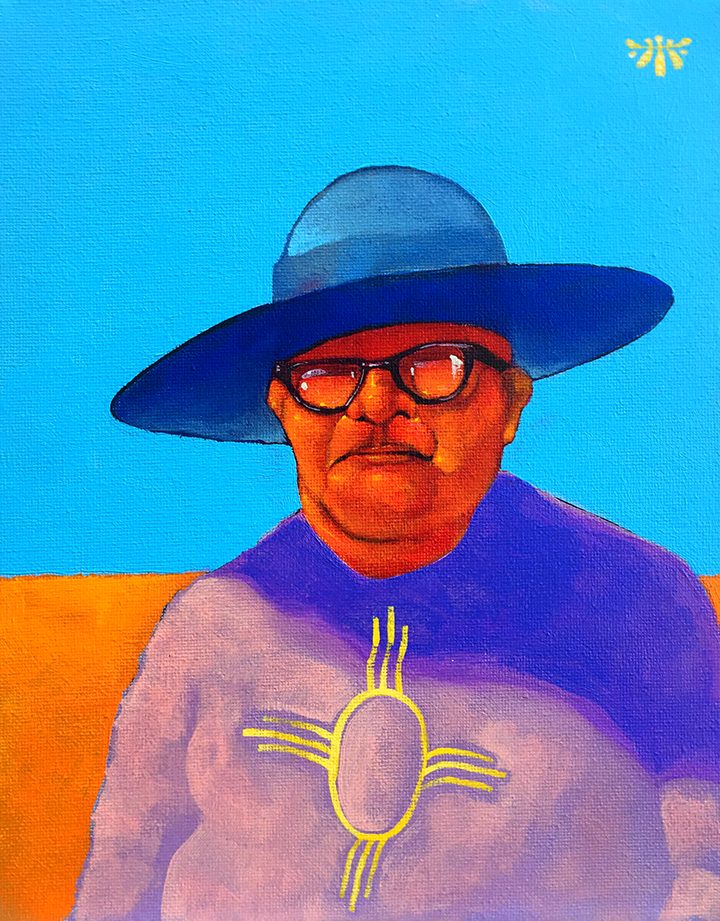 Creek Kid out in New Mexico 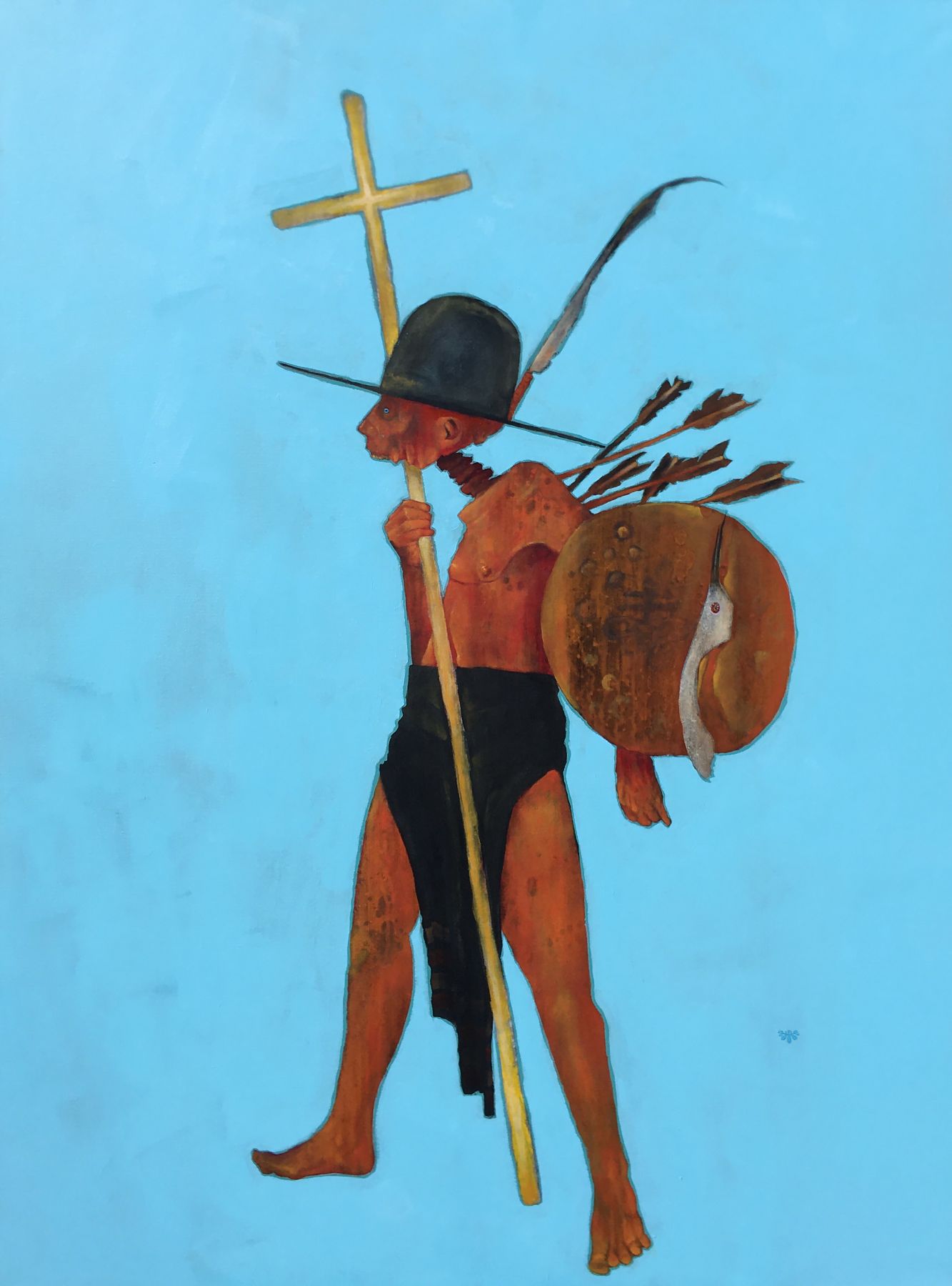 In Perennial, the artist deals with the topics of personal identity and self-discovery.  The use of the cross in the work relates to the artist's personal experience in dealing with the feelings of guilt in the context of his religious upbringing.  Another reference to this ideology is the black loin cloth that the figure wears, which symbolizes the wearing of hairshirts as penance, as exemplified by John the Baptist.  Arrows in the figure's back are a comment about betrayal by one’s own belief system.  The figure's missing jaw relates to the artist’s feeling of his own lack of individual voice in this context.  Combining these various elements and references to the Judeo-Christian ideology, Perennial, is a powerful statement on the artist's own path of spiritual and religious self-discovery. 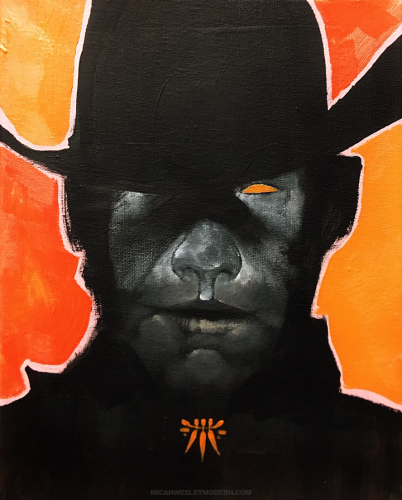 In the Reckoning series, Mr. Wesley tackles the broad and complicated subjects of Manifest Destiny, the American "West", and the depiction of Indians living there.   The cowboy hats seen throughout this series are a reference to what the artist calls the “Great Western Myth”.  Particularly problematic in this mythology is its creation of pan Indian generalizations and identity.  Mr. Wesley points to lack of recognition of unique tribal identities in this mythos.  Here the artist also pushes back against the perception of the Cowboy as the icon of the American West.  An icon that ignores the true influence of both Native Americans and Mexican vaqueros in the culture of the West.  This series contains some of Mr. Wesley’s most recent works, and it is a subject he continues to explore. 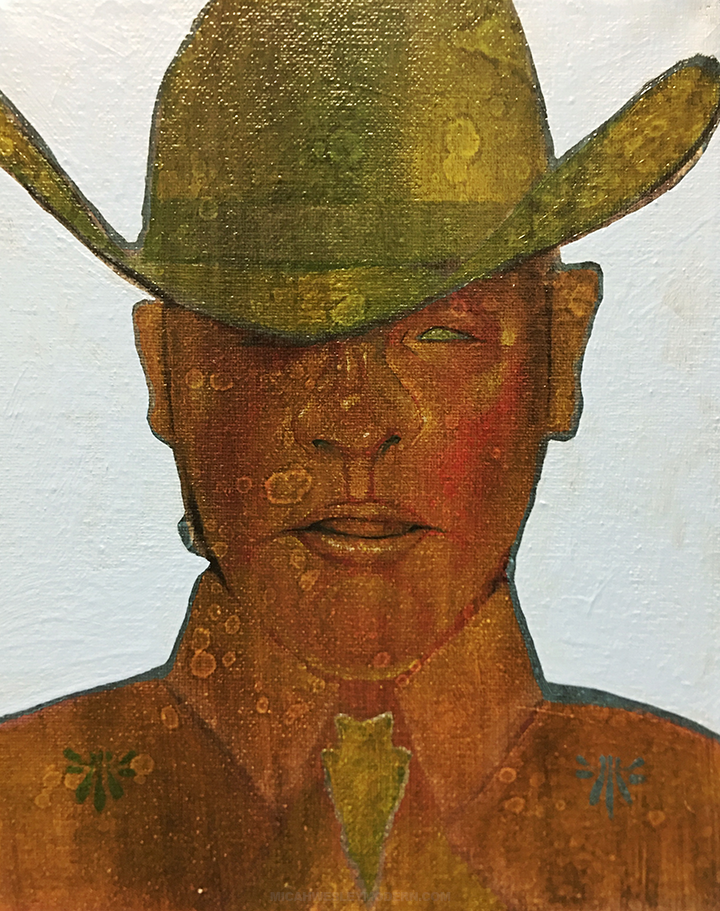 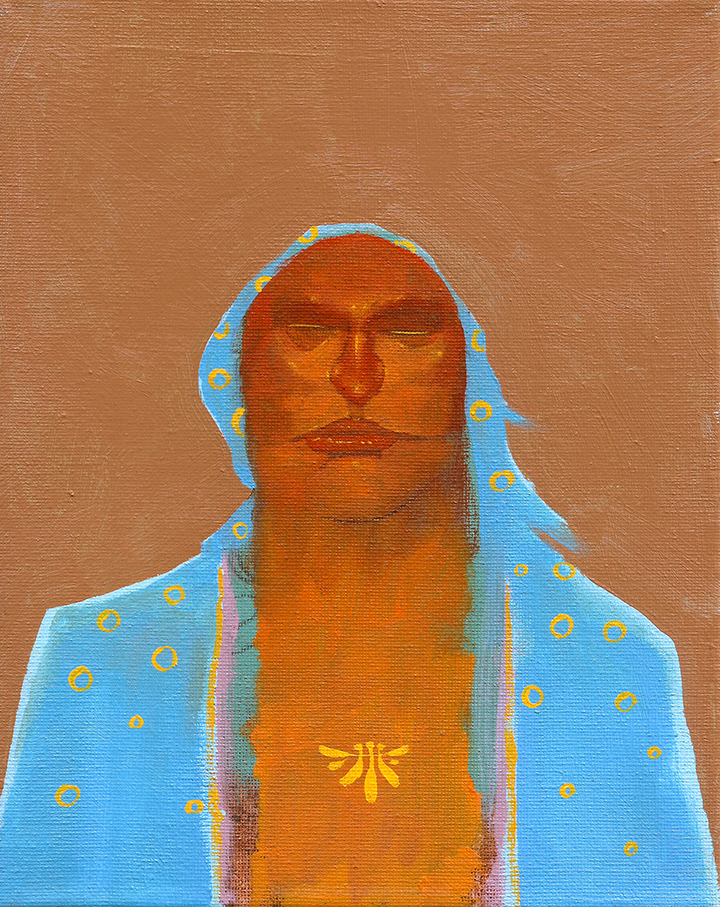 Gems from the Equinox 1

In the Gems from the Equinox series, the artist explores the idea of cultural appropriation and the resulting distortion of ideas and messages.  This series was inspired by the artist's own experiences in public speaking and the frequent questions he receives from a general audience about Native American spirituality and mysticism.  Although Mr. Wesley has never read Aleister Crowley's book Gems from the Equinox, nor does he have knowledge of the subject matter, he appropriates the title and content and applies it to his own work.  This is an intentional decision on the artist’s part, meant to reflect the issue that traditional Native American spirituality and traditions are often adopted and appropriated by non-Indians.  Just as some non-Indians have created new narratives of Indian spirituality to fit their own world without truly seeking to understand the beliefs, so too has Mr. Wesley reframed the idea of Gems from the Equinox to fit his own ideas without a true understanding o the subject.  Once again Mr. Wesley uses tongue in cheek humor to comment on a serious subject. 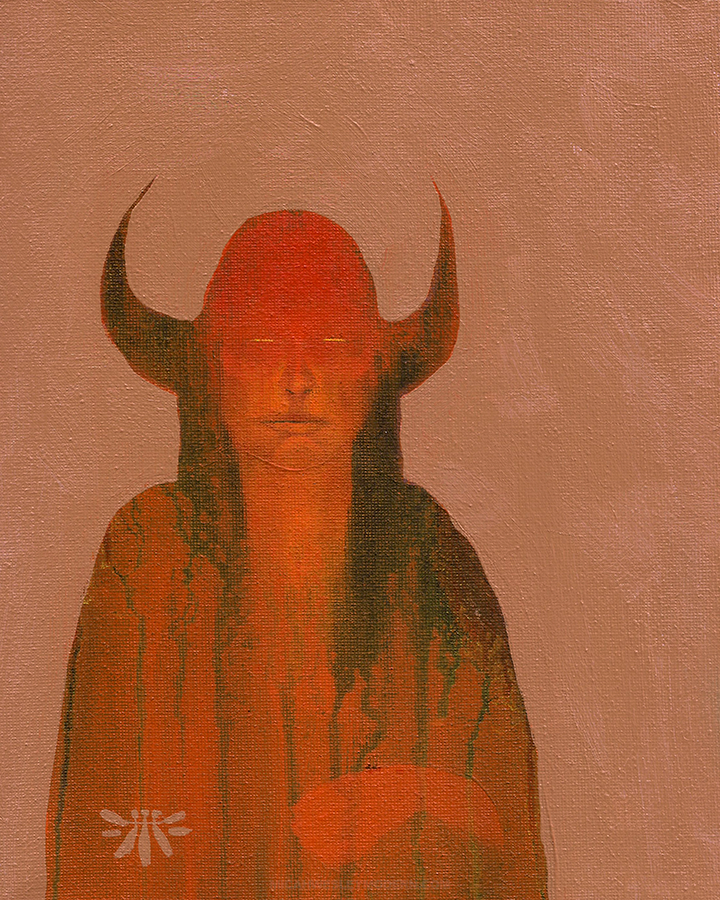 Gems from the Equinox 2 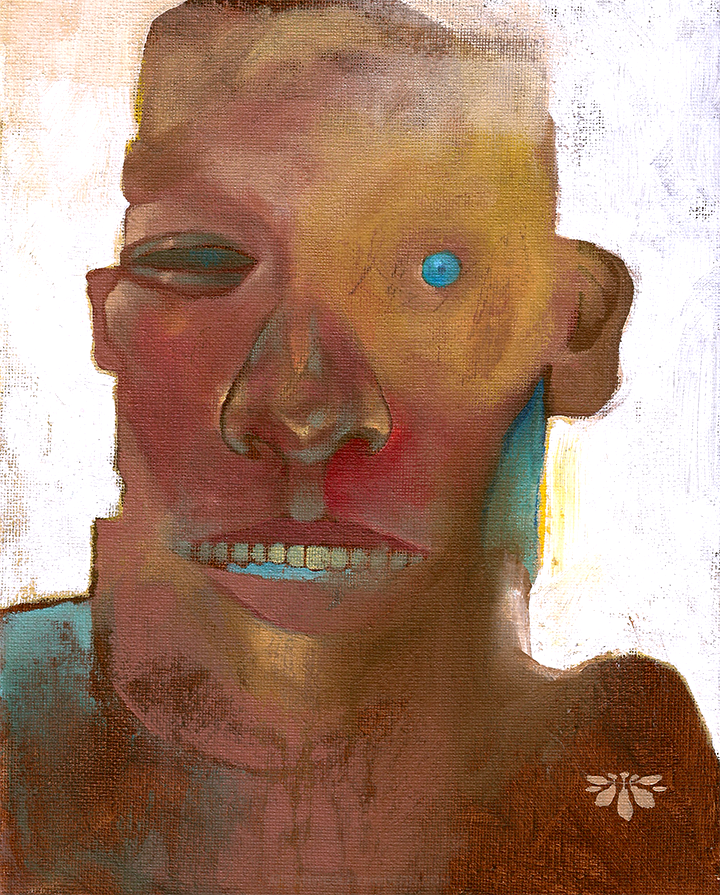 Gems from the Equinox 3 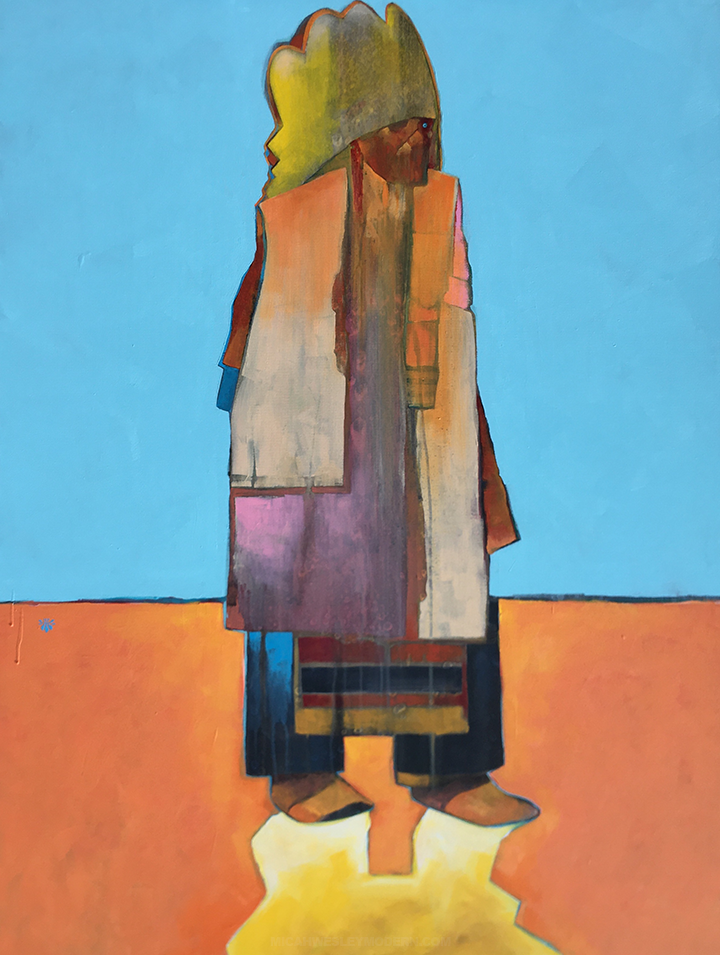 Classical art history is often featured in Mr. Wesley’s work, and this painting is no exception.  Apollo references the Greek god of the same name.  The artist deliberately emulates the styles of Indian artists such as T.C. Cannon and Fritz Scholder in this composition.  His use of bright colors and lack of shadows calls to mind Apollo, the Greek god of the Sun.  Just as Apollo was often considered the ultimate specimen of a Greek god, Mr. Wesley has crafted this figure in the lens of a stereotyped Native American leader.

My Face When You

My Face When You